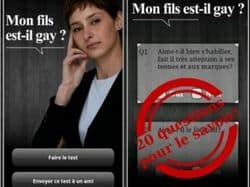 I don't want to believe this is serious. An Android app in France promises to determine whether your son is gay by hitting you with 20 questions.

Subjects broached in questions on the app include the child’s dress sense, sporting prowess, musical taste and whether or not he reads newspapers. The questionnaire also asks mothers whether they are separated or divorced and whether there is an absence of a 'father figure' in their son’s life.

If the app says your son isn't gay, it gives you this reassurance: "You have nothing to worry about… You have a very good chance of being a grandmother with all the joys that brings."

The other answer: "Your son is gay, accept it."