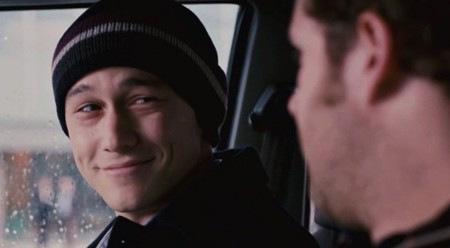 Joseph Gordon-Levitt smiles through cancer in 50/50

YOUR FEATURE PRESENTATION
Joining the very slim ranks of Cancer Comedies, 50/50 must surely number among the best of them. The film begins with a long shot of 27 year-old Adam (Joseph Gordon-Levitt) jogging. It's unclear why the film begins this way (we never see him exercise again) but it's telling. Adam is about to embark on a sweaty exhausting journey with no set destination and it takes him awhile to come into focus.

As protagonists go, Adam is a passive blurry character. He lets his loud friend Kyle (Seth Rogen) control their friendship. Even though he's only just given her a dresser drawer, his girlfriend Rachael (Bryce Dallas Howard) is calling all the relationship shots – including no blow jobs which infuriates Kyle on Adam's behalf. Adam seems content to sit back and take whatever life does or doesn't offer him. Enter: Cancer. His diagnosis happens very early in the movie in a suitably disorienting scene where the only word from the doctor's mouth that Adam can latch on to with any understanding is  "Cancer". Adam is soon whisked into chemotherapy and it's the treatment that begin to control him. He sits back and takes in his new painful reality with something like peaceful acceptance. Or does he? Just how much is this ever-accommodating guy absorbing? 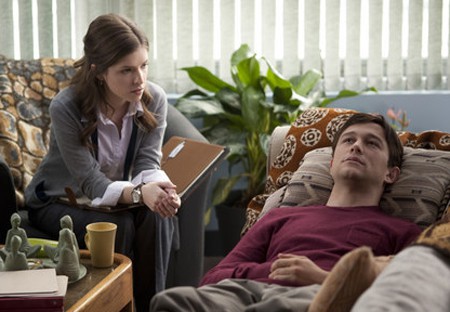 His therapist (Anna Kendrick) sees through the calm facade but doesn't yet have the skill – she's only a grad student – to shake him from what she sees as numb shock. His overbearing mother (Anjelica Huston, just superb in an agonizingly small role. More! More!) could worry him right out of peacefulness so he ignores her.

Despite the intense focus on Adam and his life-threatening illness, the movie is generous enough to make sure that each of its supporting characters get at least one scene wherein you suddenly understand how hard Adam's illness is for them when they're offscreen. Except Rachael, that is. Between this and The Help Bryce Dallas Howard is in danger of becoming shorthand typecasting for Detestable Woman You're Supposed to Hate. It's a blemish on this otherwise kind-hearted movie that it takes such joy in hating her. In fact, it actually burns her in effigy! 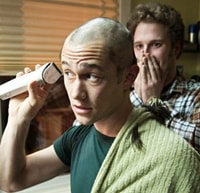 To 50/50's credit, whether or not Adam will survive doesn't seem to be the driving thrust of the story. Instead 50/50 concerns itself with charting Adam's dawning awareness of his own feelings, collecting sympathetic obversations (Adam's relationship with an adopted dog is subtlely handled) and crude but funny diversions (Kyle is obsessed with using cancer to score them both sympathy-sex). It's in the slow accumulation of these laughs and details that the movie truly pays off. Out of nowhere your eyes are watering and the lump in your throat won't quit. Points of entry to Teary Mess Land will undoubtedly vary from moviegoer to moviegoer but for me it was a simple no-fuss scene in which Kyle passes out drunk and Adam heads to Kyle's bathroom only to discover his best friend's surprising reading material. The movie, like its bromantic central friendship, pretends to be casual but the feelings run deep.

ALSO OPENING
Daniel Craig and Rachel Weisz, recently married offscreen, play a married couple who have a nightmarish experience in their new DREAM HOUSE. Anna Faris plays a single woman tracking down ex-boyfriends with the help of her shirtless neighbor Chris Evans in WHAT'S YOUR NUMBER? (Gee I wonder who she ends up with.) In limited release Michael Shannon has Oscar-buzzing apocalyptic nightmares in the unsettling drama TAKE SHELTER and Anna Paquin stars as a guilt-ridden teen who may have caused a horrible death in MARGARET. Don't be alarmed if Paquin appears preternaturally youthful. The movie, beset by post production and legal problems, was filmed before she ever fell for those handsome horny vampires in Bon Temps!

Finally, the New York Film Festival begins tonight with the premiere of Roman Polanski's CARNAGE (my review), an adaptation of the Tony winning play "God of Carnage" by Yasmina Reza. Oscar winners Jodie Foster, Kate Winslet, and Christoph Waltz (plus John C Reilly) make up the squabbling quartet. In short: Prestige movie season has begun, everyone marching towards Oscar though few will reach that naked gold man.