What if Tokyo became a radioactive zone? Watch the haunting, 5-min. film, Blind. And here's a photo essay of Japan's new ghost towns.

Libyan rebels are rounding up blacks, suspecting them of being foreign fighters for Qaddafi. The Drudge Report is linking to the story right now as its top headline, and you know what that means: the article has a terrifyingly racist comment section. If you want to lose all faith in humanity, go read it, at your own risk.

Mormon, Catholic and conservative groups have yet to throw their weight behind the referendum to repeal California's gay history law. 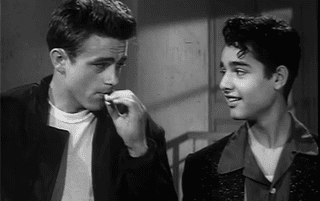 A GOP staffer leaves his party – and says it's "full of lunatics." Read his epic farewell letter.

James Franco's Sal premiered at the Venice Film Festival. It's about the final days of Sal Mineo, the legendary gay actor, before his murder. Here he is opposite (bisexual?) James Dean in a scene from Rebel Without a Cause that may or may not be homoerotic, as some have claimed, but is certainly beautifully acted. Watch the video.