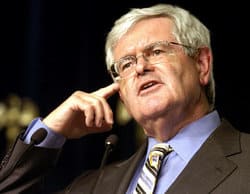 Republican presidential candidate Newt Gingrich appeared in Iowa for a campaign rally today and was asked by an audience member how he feels about gay marriage.

In addition to reiterating his opposition to equality, Gingrich described same-sex nuptials as a "temporary aberration."

"I believe that marriage is between a man and woman,” he said, according to the Des Moines Register. “It has been for all of recorded history and I think this is a temporary aberration that will dissipate. I think that it is just fundamentally goes against everything we know.”

Of course Gingrich is wrong: there's no way LGBT activists and their allies are suddenly going to forget about gay marriage, one of the most pressing political issues in the States today. In fact, more and more Americans support marriage equality, and Gingrich's comments show how far removed he and his Republican peers are from the American zeitgeist.