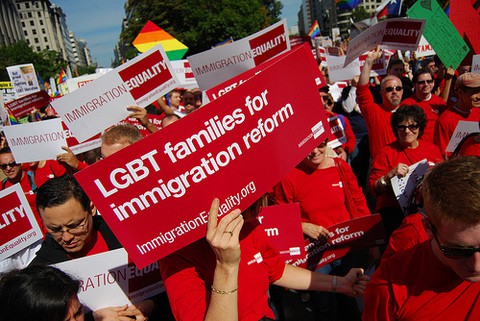 President Obama sat down with Latino news outlets today for a roundtable. In addition to discussing topics such as immigration reform and Puerto Rico’s federal future, the commander-in-chief addressed binational gay couples who want to petition for legal status for their foreign-born partners, something prohibited by the Defense of Marriage Act.

Obama appears optimistic about the issue, telling reporters that he thinks courts will soon decide on DOMA, legislation he calls unconstitutional and refuses to defend, and he believes that his stance will help persuade judges toward the side of right.

“The position that my administration has taken, I think, will have a significant influence on the court as it examines the constitutionality of this law,” said the president. “Once that law is put down — and I don’t know what the ruling would be — addressing these bi-national issues could flow from that decision.”

The president failed to make a prediction on pending court challenges, although he did reiterate his core belief on the issue: “DOMA doesn’t make sense, it’s unfair; I don’t think it meets the demands of our constitution.”

Obama also placed his bets on judicial action, rather than legislative, because “the likelihood of us being able to get the votes in the House of Representatives for a DOMA repeal are very low at this point.”

He just said a mouthful.