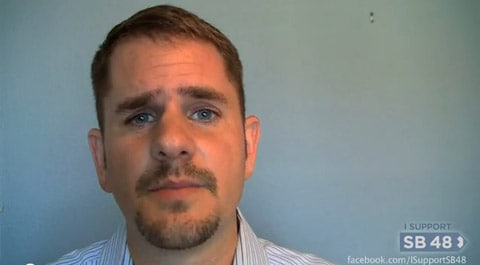 Videographer and activist Sean Chapin has recorded a series of videos defending SB48, the recently-passed Fair Education Act, or "LGBT History Bill", as conservatives work toward collecting signatures for a ballot referendum that would repeal the law.

Watch Chapin's videos, AFTER THE JUMP…

Conservatives must collect 504,760 signatures from registered voters by October 12 to qualify the measure for the ballot. The AP's Lisa Leff reports that they face an uphill, though not impossible battle:

…so far, Mormon and Catholic church leaders and conservative groups who spearheaded the Proposition 8 campaign have not joined the effort to qualify the gay history referendum for the June 2012 ballot, leaving less-experienced Christian conservatives to lead the charge without the organizational prowess and funding to hire paid signature gatherers.

Political operatives say they can't recall any citizens' initiative that made the state ballot without professional petition circulators in almost three decades.

"If someone wrote a million-dollar check, we would be guaranteed to get this on the ballot," said Pacific Justice Institute President Brad Dacus, whose legal aid firm wrote the proposed measure and is co-sponsoring the signature-gathering effort. "That's not the case at this point… We are counting on people in churches and communities and families making the extra effort to get it done."

Chapin's videos hope to expose media bias and the extreme agenda of conservatives hoping to get rid of the new law.

Last week, Equality California lashed out at the Family Research Council and Tony Perkins for efforts to repeal the law. In a series of strong statements, Palencia exposed the group's ties to the Ku Klux Klan and other extremist groups.

Watch Chapin's videos, AFTER THE JUMP…