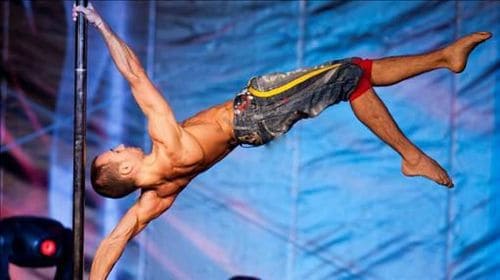 The WSJ looks at competititive pole dancing in Hungary, and a new interest in it from men:

With its roots in strip clubs and bedrooms, pole dancing has been dismissed as a misogynistic playground in which women contort themselves for the viewing pleasure of men. But lately some women have fought to transcend titillation by rebranding it as fitness. Some have even petitioned the International Olympic Committee to make it an Olympic sport.

But a lingering taboo surfaces when men seek to slide onto the pole, too.

"When I tell people what I do, there is shock, 'No! pole dancing is for women," said the "poler" Mr. Shields, who is also a student nurse. "Pole dancing, he says, "can be masculine, too."