Fearing confrontation, the City of New York has cancelled its planned clean-up of Zuccotti Park, in which protesters who had been encamped their for four weeks were to be displaced while the area was cleaned. New rules stated that people would not be able to return with tents, sleeping bags, etc, and many suspected that this was a ploy to secure full eviction of the protesters at some point.

The clean-up was canceled this morning:

The announcement was made by the Bloomberg administration around 6:20 a.m., about 40 minutes before workers were scheduled to enter Zuccotti Park, which has been the home base for the Occupy Wall Street demonstrators angered by what they see as an unfair and corrupt financial system.

“Late last night, we received notice from the owners of Zuccotti Park — Brookfield Properties — that they are postponing their scheduled cleaning of the park, and for the time being withdrawing their request from earlier in the week for police assistance during their cleaning operation,” Deputy Mayor Caswell F. Holloway said in a statement.

Last night, Russell Simmons, who made several trips to OWS earlier this week, one with Kanye West, offered to pay for the cleaning of the park himself to avoid confrontation. 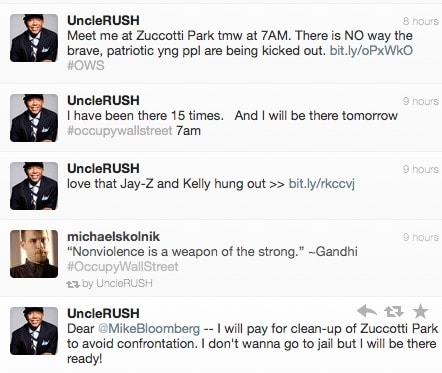