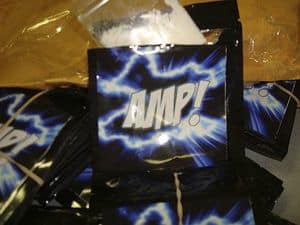 The DEA is cracking down on bath salts!

Do you know about bath salts? They don't go in your bath. These semi-legal drugs, sold in head shops under names like "Vanilla Sky" and "Bliss," are usually snorted or ingested intravenously, and contain mephedrone and methylenedioxypyrovalerone, which are apparently real mind-benders. Bath salts first popped up in the media earlier this year, attached to all kinds of horror stories. In the New York Times this summer, we learned:

Poison control centers around the country received 3,470 calls about bath salts from January through June, according to the American Association of Poison Control Centers, up from 303 in all of 2010.

“Some of these folks aren’t right for a long time,” said Karen E. Simone, director of the Northern New England Poison Center. “If you gave me a list of drugs that I wouldn’t want to touch, this would be at the top.”

… Some of the recent incidents [involving bath salt abuse] include a man in Indiana who climbed a roadside flagpole and jumped into traffic, a man in Pennsylvania who broke into a monastery and stabbed a priest, and a woman in West Virginia who scratched herself “to pieces” over several days because she thought there was something under her skin.

Does that sound at all familiar? Like those bogus stories from the 60's about nice suburban girls trying acid for the first time and staring at the sun until their eyes melted? Or the Reefer Madness-era stories about weed turning suburban boys into rape-crazy cavemen?

Still. Just 'cuz drug opponents cried wolf once (twice, three times, whatever) doesn't mean they can't occasionally tell the truth. And those bath salt stories appeared in the Times! It's the paper of record!

And now, according to the Times:

The Drug Enforcement Administration took emergency action on Friday to ban three synthetic stimulants used to make products that are marketed at head shops and on the Web as “bath salts,” but are actually used as recreational drugs that mimic the effects of cocaine, LSD and methamphetamine.

The emergency measure places these substances — mephedrone, methylenedioxypyrovalerone (MDPV) and methylone — under the D.E.A.’s most restrictive category for at least a year, while they study whether they should be permanently banned. This classification is reserved for substances with high potential for abuse and no accepted use under medical supervision.