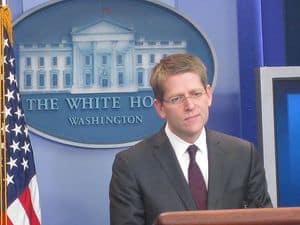 The Washington Blade caught Jay Carney, the White House press spokesman, in an unusually flat-footed moment when seeking the president's reaction to the death of LGBT civil rights leader Frank Kameny. “I’ll have to take that," said Carney. "I know that he passed away, but I don’t have a comment on that."

Really? How's about "I know that he passed away, and we all obviously feel for his friends and colleagues"?

Or: "I know that he passed away, and I know we're all grateful for the work he's done over the years on behalf of American citizens …"

Nawp. Carny kicked the can down the road. Carney said he had no explanation for why the White House hadn't issued a statement on Kameny's death, and when asked whether President Obama would visit Mr. Kameny's body as it lies in state, Carney said, rather testily: "I'm not his scheduler."

Hey! The president's a busy guy! No hard feelings! But maybe just a little sentiment wouldn't hurt? A little bit of fellow-feeling?

The president's said nice things about Mr. Kameny before. As the Blade points out:

"Frank was fired from his job as an astronomer for the federal government simply because he was gay," Obama said. "And in 1965, he led a protest outside the White House, which was at the time both an act of conscience but also an act of extraordinary courage. And so we are proud of you, Frank, and we are grateful to you for your leadership."