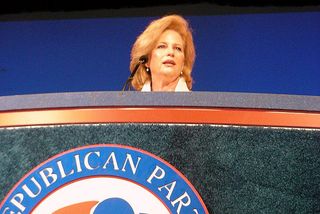 Gov. Rick Perry's a longshot for the White House these days, and his wife knows why. It's his faith. Apparently, there's nothing the American people hate more than an honest Christian man from a mainline Protestant denomination.

A pained-looking Anita Perry shared this alarming tidbit with an audience at Greenville University in South Carolina last Thursday. In a speech that was, according to Talking Points Memo, "filled with Biblical references," she said:

Watch Mrs. Perry explain it all AFTER THE JUMP…