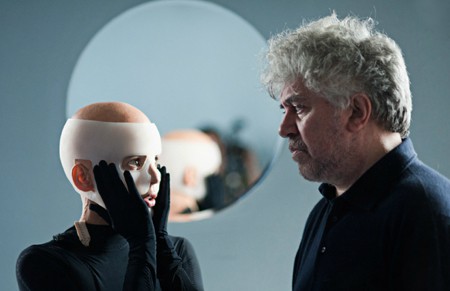 But no matter. The only one that truly matters is Pedro Almodóvar's new gem THE SKIN I LIVE IN. While it's not quite on the level of his five masterworks (Law of Desire, Women on the Verge…, All About My Mother, Talk To Her, and Volver if you ask me) very few films are. Second tier Almodóvar is still better than most movies made in any given year. For his latest he's reunited with his only male muse Antonio Banderas for their sixth film together and their first since Tie Me Up! Tie Me Down! (1990) in which sexy Antonio held a beautiful woman prisoner until she loved him. Twenty-one years later and Antonio is up to his old Stockholm Syndrome tactics again. This time he's a brilliant cold plastic surgeon and the woman he's holding captive (Elena Anaya) seems to be a semi-willing guineau pig in a series of illegal surgeries which will give her flawless new skin. But why does he keep her locked up? What exactly happened to the surgeon's wife and daughter who are nowhere to be seen? How long has this been going on?

Like most Almodóvar films this one is novelistic with intriguing details that could make their own movies, has themes of identity and sexuality that are of interest to LGBT audiences, features smartly executed twists which bring the story into perverse focus, and wows with stunning imagery including simple but freakishly haunting costumes from Paco Delgado (with an assist from Jean Paul Gaultier). I hate to quote Peter Travers from Rolling Stone since his whole raison d'etre as a film critic is to be quoted but they used to promote Pedro's movies with this blurb:

Did you know they had personal trailers in the 19th century? How else to explain Aaron Johnson's physique in Albert Nobbs?

More identity crises AFTER THE JUMP… 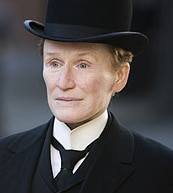 Okay, okay. Aaron Johnson is not of much consequence to Albert Nobbs, but I just wanted to post those screengrabs courtesy of MNPP. Can you blame me?

Albert Nobbs is really all about Glenn Close's Oscar grab though the trailer does seem to have something of an identity crisis itself. Close plays the titular character, a female waiter who passes herself off as a man in Ireland. She finds an unexpected ally in Mr Hubert Page (Janet McTeer) someone much more comfortable with their trans identity. Not many people have seen the film yet but among those who have there's some concern that it's too restrained a star turn and film to win Glenn Close that elusive Oscar. But "career achievement" angles and story hooks can go a long way during Oscar season. It's worth noting that Glenn Close first played this role on stage in 1982, which was also the year of her movie debut (The World According to Garp) for which she earned the first of her five Oscar nominations and she co-wrote the Nobbs screenplay. That's quite a lot of material with which to build an Oscar campaign. I wouldn't bet against her for a Best Actress nomination (at least at this point).

Speaking of Oscars and actresses, some people are mighty pissed at Hilary Swank for a recent appearance in Chechnya.

Michelle Williams is also generating Oscar buzz now that people have been seeing My Week With Marilyn. Michael Musto reminds us of this tragic Marilyn Monroe Oscar Factoid. The subject of Marilyn and acting is always a fascinating one since "Marilyn" was a performance from the beginning. Here's a great piece on the overplayed legend and the underplayed quality of Monroe's acting. I also saw the film but while I think Michelle is certainly giving it her all the takeaway for me was hammy Kenneth Branagh's brilliant casting as hammy Sir Laurence Olivier. 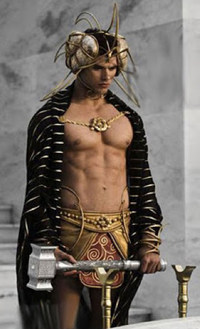 The Immortals, that sweaty muscley Tarsem Singh picture (he previously directed the visual wows that were The Cell and The Fall) sure is banking on the beefcake to pack 'em in on opening weekend. Regarding the new photos of Henry Cavill (your future Man of Steel) and Kellan Lutz (to your right),  it's worth noting that the costumes are by the brilliant Eiko Ishioka who won the Oscar for Bram Stoker's Dracula (1992) for costume design that practically doubled as art direction. Who needs sets when you've got Ishioka costumes?

Newsflash: Jack Nicholson has not retired from acting despite appearances. Turns out he's considering a Jackie Robinson biopic.

This new TV season is so trashy isn't it between new bitchy soaps like Ringer and Revenge? I don't know what the hell to make of American Horror Story but the legendary Jessica Lange is definitely winning fans again with her latest variation on Unstable Faded Beauty.

Whatever you think of out director Joel Schumacher and many people aren't fans, this new interview with Movie|Line on the occassion of the release of Trespass (starring Nicolas Cage and Nicole Kidman) is kind of endearing. Love this bit:

My job is to hire the most talented people and just keep reminding them how talented they are. How heightened is too heightened? I think we all love over-the-top. One big director said, “No one ever paid money to see ‘under-the-top.’

That's so true. If Glenn Close were any less obvious about wanting to win an Oscar, if Eiko Ishioka were any calmer with her costuming, and if Pedro Almodóvar weren't dependably outré and colorful, we'd be sorely disappointed.