, which came out today, and I was curious to know if the book described any of Jobs' interactions with gay and lesbian friends or employees. 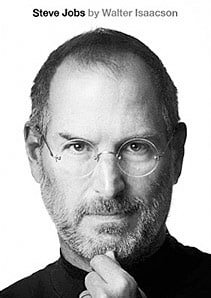 The book does, in fact, discuss Steve Jobs' first encounter with someone gay, and how he handled it, and it happened shortly after February 1974, when Jobs became one of the first fifty employees of Atari.

Jobs developed a reputation at the company for arrogance and body odor, two qualities that made many of the employees want to avoid him. He did find one close friend, however.

I've transcribed this segment by hand, so apologies in advance for any inaccuracies to the original text, or typos:

Not all of his coworkers shunned Jobs. He became friends with Ron Wayne, a draftsman at Atari, who had earlier started a company that built slot machines. It subsequently failed, but Jobs became fascinated with the idea that it was possible to start your own company. "Ron was an amazing guy," said Jobs. "He started companies. I had never met anybody like that." He proposed to Wayne that they go into business together; Jobs said he could borrow $50,000, and they could design and market a slot machine. But Wayne had already been burned in business, so he declined. "I said that was the quickest way to lose $50,000," Wayne recalled, "but I admired the fact that he had a burning drive to start his own business."

One weekend Jobs was visiting Wayne at his apartment, engaging as they often did in philosophical discussions, when Wayne said that there was something he needed to tell him. "Yeah, I think I know what it is," Jobs replied. "I think you like men." Wayne said yes. "It was my first encounter with someone who I knew was gay," Jobs recalled. "He planted the right perspective of it for me." Jobs grilled him: "When you see a beautiful woman, what do you feel?" Wayne replied, "It's like when you look at a beautiful horse. You can appreciate it, but you don't want to sleep with it. You appreciate beauty for what it is." Wayne said that it is a testament to Jobs that he felt like revealing this to him. "Nobody at Atari knew, and I could count on my toes and fingers the number of people I told in my whole life. But I guess it just felt right to tell him, that he would understand, and it didn't have any effect on our relationship."

In related news, Apple has posted its company memorial to Jobs on its website.

You can also watch 60 Minute lengthy segment on Jobs from last night, AFTER THE JUMP...

Previous Post: « Denmark to Allow Same-Sex Marriage Next Year
Next Post: Statue of Liberty Being Equipped with Five Accessible Webcams »