Michele Bachmann held a conference call with Ralph Reed's Faith and Freedom coalition on Tuesday night in which she spoke about gays in the military, abortion, and same-sex marriage, the Colorado Independent reports: 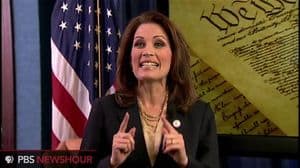 “I am a believer in the Lord Jesus Christ,” Bachmann said in her introductory remarks. “I gave my life to the Lord when I was 16 years of age. We are committed to the pro-life cause, we believe that life deserves protection from conception to natural death.”

Bachmann also talking about her work on the anti-gay marriage amendment that will be on the ballot in Minnesota in 2012.

“We also believe that God has a design for marriage between one man and one woman. I was the chief author of the marriage amendment in Minnesota and we persisted, and after seven years, in a very hostile liberal state, we finally passed that marriage amendment and it will be on the ballot and I believe it will pass in 2012.”

She said conservatives don’t win “pro-family victories’ unless they fight hard and have trust in the Lord: “It’s incredibly important that we trust him in what he can do because god is so big and so great and so powerful.”

Bachmann also addressed 'DADT' repeal, and vowed to reinstate the policy: "It worked before and what it says is the issue of sexuality is one that doesn’t come up and people aren’t allowed to be open about it because the United States military is unique, its not a social experiment.”