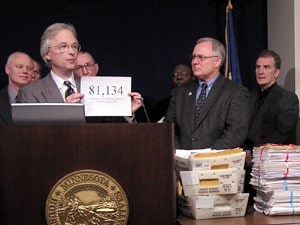 A proposed "pro-marriage" amendment will almost certainly die a slow, ignoble death in Minnesota next year. More than 8,000 attendees of the state fair, not traditionally a libertine demo, voiced their disapproval of the amendment last month. Now, several Republican pols have voiced theirs, too. "I don't think neighbors should be voting on what neighbors can and can't do in the privacy of their homes," said State Rep. John Kriesel, according to St. Paul's MSNBC affiliate, KARE. Sen. Wheelock Whitney said, movingly:

I have a gay son. I have a gay grandson. I love them. I'm proud of them. And I don't like to see them discriminated against in any way.

The video in which these words are captured profiles some members of the fam-vals crowd, too, including a debonair looking silver fox named Chuck Darrell, who promises to foment a groundswell of support for "traditional" marriage in the coming year. But Darrell seems pretty mild, and given the state fair poll, the pro-gay Republicans, and Minnesota's traditionally live-and-let-live attitude ('cuz, really, who's got the energy to judge people when it's minus-30 outside?), it seems reasonable to assume Darrell and his co-bigots are facing an uphill slog.

That impression isn't appreciably weakened by a look at one of the weapons in Minnesota's fam-vals arsenal: an innofensive-loking pamphlet, viewed briefly in one of KARE's cut-scenes, entitled "77 Non-Religious Reasons To Support Man/Woman Marriage." (A weird title, maybe, since no high profile gayfolk have yet voiced anything but support for heterosexual marriage rights, but oh well.) "77 Reasons" turns out to be a befoggled little tract compiled by The Ruth Institute, a conservative Christian organization devoted to "making marriage cool." Probably, Darrell and Co. will spend the next several months distributing these things among gatherings of chilly Minnesotans, who, upon cracking them open, will encounter page after page of inarguable wisdom-nuggets, such as:

Look at marriage from the child’s point of view. Not every marriage produces children. But every child has parents.

That's "Reason Number 10." Presumably, the next 67 reasons dare even nearer the bottom of the rhetorical barrel.

The marriage amendment hits the Minnesotan ballot in November, 2012.

Watch KARE's video, AFTER THE JUMP…