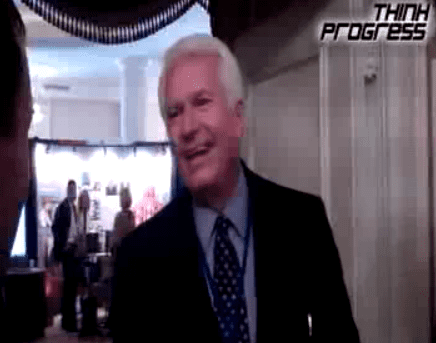 But that really nettled Fischer: after his speech, he called Romney "tasteless and tawdry," adding, "Have you seen his drapes?" (OK, I made up the last bit.)

Meantime, People for the American Way, which first pointed out the oddity of Romney's speaking at the summit with the crazed Fischer and pressured the candidate to condemn him, has cautiously – very cautiously – welcomed Romney's "tepid" rebuke. Said the group's president, Michael Keegan:

Mitt Romney clearly realized that his presidential campaign couldn’t ignore the bigotry of Bryan Fischer and the American Family Association. I’m glad that he saw fit to put at least a small distance between himself and the hate speech regularly pushed by Fischer, even if he couldn’t bring himself to call Fischer out by name. Since he began running for President, Mitt Romney has bent over backwards in a desperate attempt to make himself palatable to the extreme right. At least we’ve seen that there are some things he’s willing to speak out against, no matter how tepid his condemnation may be. It’s disappointing that none of the other candidates have been willing to go even that far.

As I said earlier, I think Romney deserves less than zero credit for his admonishment. Imagine a politician in early 1930s Germany "tepidly" rebuking Hitler – and Fischer is not far from Hitler in his rhetoric, Godwin's Law notwithstanding. Would we congratulate that politician, or see him as a symptom of a body politic weakening under the assault of totalitarianism?

There were several specific problems with Romney's tack. One, he "thinks" Fischer has crossed the line of civil discourse – as if that's a perception and not a fact. Two, he only took issue with Fischer's "poisonous language," implying – intentionally or not – that there is a reasonable way to call for deporting Muslims, barring gays from public office and depriving non-Christians of their First Amendment rights. Poisonous ideas are the problem. Three, Romney objected to the way Fischer splinters the conservative movement: "let no agenda narrow our vision or drive us apart," which sounds like a veiled reference to Fischer's Mormon-baiting. But isn't the really objectionable thing about Fischer that he divides all Americans between citizens (Christians) and a rights-less subclass (everyone else) according to a new, totalitarian logic? No mention of that from Romney.

His condemnation lacked specfics: he didn't name Fischer or any of his repugnant views. It was almost simpering, and welcoming it as barely adequate sets the bar unacceptably low. A "small distance" between Romney and Fischer won't do.

As for the other candidates: Romney's rival, Rick Perry, threw his giant pray-for-rain rally in Texas with co-sponsorship from Fischer's American Family Association. The extreme elements are well-positioned within the Republican Party now. Under the guise of a campaign to paint liberals as Nazis, Islamists and communists, the conservative movement itself is becoming totalitarian – and gays are now its most openly reviled scapegoat. If Romney's little rebuke is the best the conservative moderates can muster, there is cause for alarm.

Watch Fischer get upset, AFTER THE JUMP…