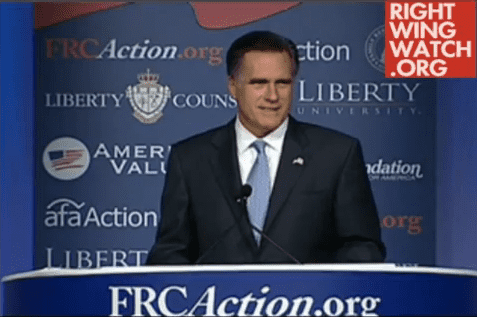 Mitt Romney spoke this morning at the Family Research Council's Values Voter Summit, the Nuremberg Rally of the religious right. The speaker following Romney was Bryan Fischer, the conservative radio host who believes that all Muslims must be deported and that the First Amendment doesn't apply to Mormons – or to anyone who isn't a Christian fundamentalist.

That Fischer is even speaking at this mammoth conservative event signals that the Republicans are veering toward totalitarianism faster than they can scream "commie-Nazis!" at the left.

What did Romney have to say about Fischer, who would strip Romney and all his fellow Mormons of their constitutional rights?

We should remember that decency and civility are values too. One of the speakers who will follow me today, has crossed that line I think. Poisonous language does not advance our cause. It has never softened a single heart nor changed a single mind. The blessings of faith carry the responsibility of civil and respectful debate. The task before us is to focus on the conservative beliefs and the values that unite us – let no agenda, narrow our vision or drive us apart.

Fischer has "crossed the line, I think." Really, ya think?

Fischer didn't seem much fazed by this most flaccid of bitch-slaps. Taking to the lectern after Romney, he declared homosexuals, more than Islamic terrorists, "the greatest immediate threat to every freedom and right that is enshrined in the First Amendment" (he's talking about protecting the First Amendment – how Goebbels of him!). The line got a hearty applause.

Romney has given us the definition of milquetoast. He gets less than zero credit for meekly complaining about the totalitarian ringleader feted in his midst.

Watch clips from both speeches, AFTER THE JUMP…