After an unfortunate hearing error in the recitation of the nominees, author Lauren Myracle, the author of Shine, a book about friendship and an anti-gay hate crime in the South, agreed to withdraw her novel as a nominee in the Young People Literature category of the National Book Awards this week. National Book Foundation staff had originally misheard Shine for Chime when the list of nominees was read by the judges: 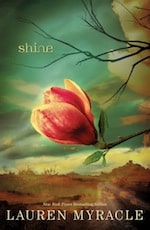 Last week, Chime by Franny Billingsley was added as a sixth nominee to the category, and Harold Augenbraum, NBF executive director, confirmed Monday that NBF staff had originally misheard Shine for Chime when the list of nominees was read by the judges over the phone. The mistake was not caught until the judges heard the announcement on last Wednesday’s radio broadcast. The YPL judge’s panel is chaired by author Marc Aronson.

Myracle and her publisher were, not surprisingly, crestfallen:

Myracle’s publisher Susan Van Metre said she found the entire process dismaying. “This was a week of extraordinary highs and lows, and throughout, all of us at Amulet and Abrams have remained in complete support of our amazing author, who has published great, groundbreaking books with our house for almost a decade,” she said

NBF has agreed to donate $5,000 to the Matthew Shepard Foundation in support of Shine, which deals with issues faced by young gay people as part of the story that revolves around a hate crime.