I'll have a post up tomorrow on the president's speech at the HRC. For now, here's your nightly serving of links.

10 books that were so gay, they were banned.

LISTEN: Sean Hannity debates a Wall Street protestor. Listen how he insists his opponent is a Marxist after she gently suggests a merger of socialism and capitalism. In-your-face red-baiting. 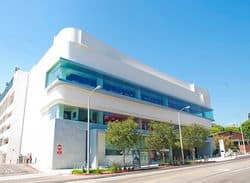 A refreshed style of modern architecture in W. Hollywood.

WaPo: Gay men should be allowed to give blood.