The National Organization for Marriage, which continues to see the court rule against it in Rhode Island and Maine where it is trying to keep secret the names of donors to anti-gay campaigns, says it will defy the law again in Minnesota if need be. 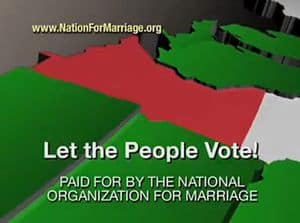 The group, with Minnesota Family Council and the Minnesota Catholic Conference is part of a coalition trying to pass an anti-gay amendment there.

Last week, the Minnesota Campaign Finance and Public Disclosure Board announced it was considering updating its rules to close loopholes in the ballot initiative’s reporting requirements. The board released guidance to outside groups that want to donate to ballot campaigns such as Minnesota for Marriage which supports the amendment or Minnesotans United for All Families which opposes the amendment, and spelled out how those donations would be disclosed.

The guidance would heighten public disclosure around campaign spending and will be debated before the board this week. On Tuesday, Minnesota for Marriage cried foul and said it would only do what it had planned to in the past, calling the new guidance “illegal.”