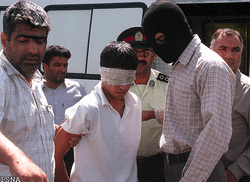 But would he support jailing them? That question wasn't asked.

Republican presidential candidate Rick Santorum on Thursday pledged to speak out against the executions of gay people in Iran — calling it “a grave moral wrong” — and accused President Obama of not addressing the issue.

Barron commended Santorum while saying the Obama administration has failed to address the issue.

“While leaders like Israel’s Bibi Netanyahu have addressed the United Nations about the barbaric treatment of gay people in Iran, this administration has chosen to turn a blind eye,” Barron said.

Despite claims Obama hasn’t addressed the issue, the president has spoken up more generally in favor of LGBT rights during a speech last month before the United Nations General Assembly, making him the first sitting U.S. president to do so.