The Archbishop of Glasgow, Mario Conti, is the latest Christian to play the victim card to try and stop gay people from being treated equally. Conti sent a letter to Scottish parishes urging them to oppose marriage equality, ATV reports: 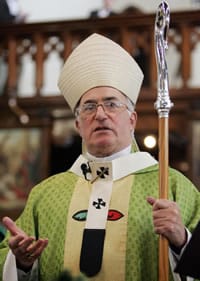 The SNP government has made it clear that under their proposals Churches would be free to choose whether or not they wish to hold gay marriage ceremonies. That reassurance has not subdued opposition from Church figures though and Mario Conti, Archbishop of Glasgow, is urging all the Scottish parishes to oppose equal marriage rights for gay couples. Catholics are now being urged to sign a declaration stating their opposition. Conti claims that legalising gay marriage will lead to "gross discrimination" against Christians and that the government doesn't have a mandate to "reconstruct society on ideological grounds”. Conti states  “The Catholic Church, for one, will not accept it, and indeed will actively campaign against it." And “There will be other consequences in law, and social policies stemming from it which need to be taken into account, for example housing provision, social security entitlements and the legitimate expectations of families for support in having and bringing up children on whom the future of society depends, and for which society should make provision.”