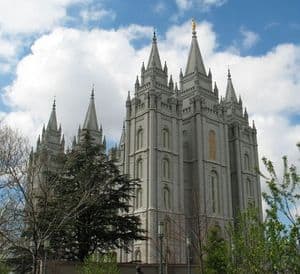 As you read this, "hundreds of gay Mormons, their families and friends" are gathered in Salt Lake City, UT, to talk about sexuality at a conference called "Circling The Wagons." According to The Salt Lake Tribune:

The purpose of the conference, sponsored by researcher John Dehlin, along with Mormon Stories and Open Stories Foundation, is "to create a space where LGBTQ or SSA individuals and their families and allies can gather to acknowledge, explore and honor shared experiences."

What kinds of folks are these LGBT Mormons? A poll conducted by Utah State University found:

… nearly two-thirds (65 percent) of the 1,600 respondents had tried to change their orientation, and 86 percent classified church counseling that sought to end their same-sex attraction as not helpful, somewhat harmful or severely harmful.

About a third (29 percent) of the respondents said they remained active in the LDS faith, a little more than a third were inactive (36 percent) and 26 percent asked to have their names removed from the church’s membership rolls.

Some of the attendees include a former Methodist minister who became an LGBT supporter after some of his congregants came out, as well as:

Circling The Wagons is organized by Ms. Pearson's organization "Mormon Stories." Needless to say, it's not affiliated with the LDS Church.