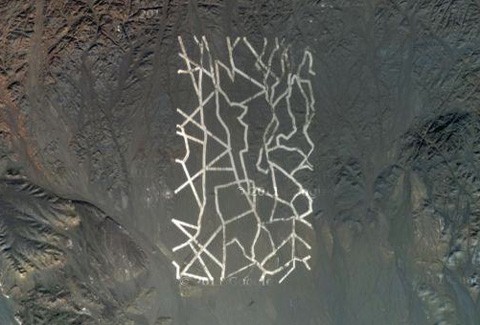 Gizmodo points out some inscrutable Google Earth discoveries in the Chinese desert:

It's located in Dunhuang, Jiuquan, Gansu, north of the Shule River, which crosses the Tibetan Plateau to the west into the Kumtag Desert. It covers an area approximately one mile long by more than 3,000 feet wide.

The tracks are perfectly executed, and they seem to be designed to be seen from orbit.

Nobody can quite say what they are except that a few have to do with targeting. 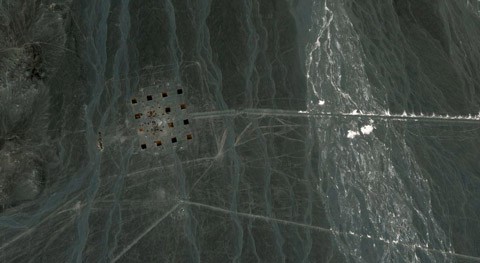 Some are in grid formations, some in radial. There's even a bright cyan blue airport.

The purpose of the structures is unknown, but some experts suggested that they might be optical test ranges for Chinese missiles, to simulate the street grids of cities. Tim Ripley, a defence expert from Jane's Defence Weekly, compared the structures to similar grids in Area 51, the secret United States military test base in Nevada. "The picture of the circle looks very like a missile test range, with target and instrumentation set out to record weapon effects. The Americans have lots of these in Nevada – Area 51!" he said. 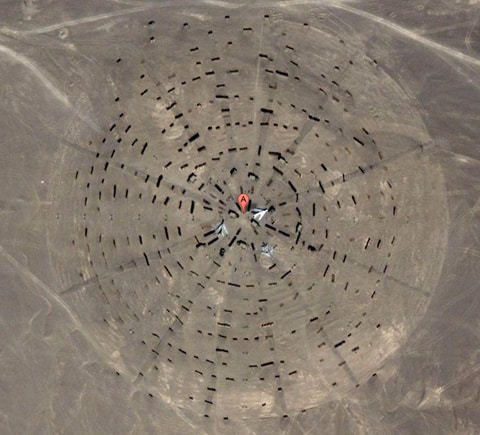