At the launch of a local project intended to increase access to water, Huarmey, Peru Mayor Jose Benitez expressed concern that drinking tap water would turn the town gay. 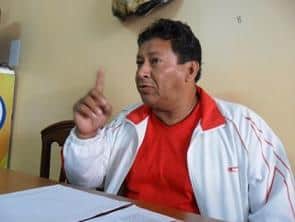 “Unfortunately Strontium reduces male hormones and suddenly we’ll be as Tabalosos, as other towns, where the percentages are increasing of homosexuality.”

The water comes from Tabalosos, a town which a Lima-based television station famously said in 2000 was inhabited by 14,000 exclusively-gay men.

The Tabalosina mayor, Jorge Luis Vasquez, said: “Young people have low self-esteem (because of) this stigma”.

Dr. Robert Castro Rodriguez, the dean of the College of Pharmaceutical Chemistry of Lima, told a radio station that strontium can cause bone cancer, anaemia and cardiovascular problems. A link with homosexuality has yet to be identified.

You may recall that in April 2010 Bolivian President Evo Morales made headlines when he made similar claims about chicken.