Rapper T.I. called in to TMZ to talk about his recent comments in defense of Tracy Morgan to Vibe magazine, in which he said that celebrities should be allowed to speak out against gay people without fear of being shut down. 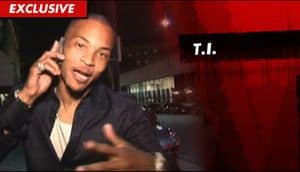 TMZ asked T.I. about the comments:

"I was quoted correctly, but I was taken out of context…I'm not saying that being gay is being un-American. What I was saying was to use whatever power or authority you have to shut people down because they don't agree with you that's not what America was built upon. The institution allows us, it affords us the right, to speak out peacefully and respectfully in opposition of any point or any topic that comes up…I'm not against gay marriage…but for the people who may have an opinion against it, then for the corporations to throw their weight around to shut them down, that's not fair."

He added: "It's about people who take themselves too seriously, any group. It's not just about gays, I think that African Americans groups sometimes take things a tad too seriously too…If you use the "n" word like Don Imus and say something that's completely derogatory and disrespectful, that's understandable. But if you just have an opinion on something that just happens to be related to the African American culture and it's in opposition, then they have no right to shut you down either."