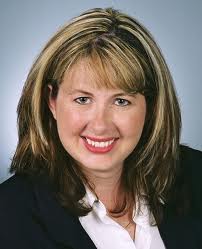 Here's a story about political scandal in Minnesota. It's a familiar kind of story. Try to fill in the blanks!

State senate majority leader Amy Koch, a staunch _____, a vocal opponent of _____ rights, and a strong defender of _____ values, resigned from her position on Friday after allegations came to light that she'd _____ a member of her staff.

Mrs. Koch is married and has a teenage daughter, and has held her office for a little less than a year. During that time, she helped orchestrate a massive Republican takeover of the state senate, which in turn helped get an anti-gay, marriage-defining amendment on the 2012 ballot. The amendment's purpose is to "protect the sanctity of marriage."

Koch's resignation from the senate majority leadership followed a sudden escalation of events beginning Wednesday night, when several of Koch's colleagues confronted her about rumors of sexual impropriety. She didn't admit to anything, but immediately suggested that she might start thinking about resignation. She didn't have to think long. Within a day, the press learned of her alleged staff-shtupping, and a day after that she was gone. No word on who her paramour was, but her hunky chief aide and spokesman, Michael Brodkord, tendered his resignation the same day as his boss.