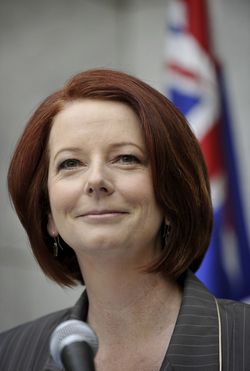 In Australia this morning (which, to folks in America, was actually early yesterday afternoon), at the Labor Party's tri-annual national conference, the Party officially added marriage equality to its platform. Whether that will make any difference to marriage equality's Australian prospects is debatable.

Labor is Australia's ruling party, just barely, and is headed by an arch Jodie Foster lookalike named Julia Gillard. Gillard's an ardent secularist, but, like several others in her party, she doesn't much care for same-sex marriage. "Opposite"-sex marriage, Gillard believes, has a "special status" that ought to be recognized by the civil apparatus. Speaking to the AP, conference attendee and Australian union leader named Joe de Bruyn explained why he agrees with her:

"This issue is one we should decide with our heads, not on the basis of emotion," said Joe de Bruyn, national secretary of the Shop, Distributive and Allied Employees Association, one of the country's largest unions. "The definition of marriage as set out in the legislation is that it is the union of one man and one woman, voluntarily entered into for life. It has always been that way since the dawn of humanity."

De Bruyn ought to brush up on his history, but no matter: Sentiments like his caused Julia Gillard to propose an amendment to make matters of marriage equality subject to a "conscience vote" — which is to say, Labor legislators shall be free to vote on issues of marriage equality according to their consciences, and shall not be forced to toe the pro-equality party line. Gillard's amendment passed, as did the platform change, the former rendering the latter all but toothless.