Brandon McInerney is scheduled for sentencing today in the death of his gay classmate Lawrence King: 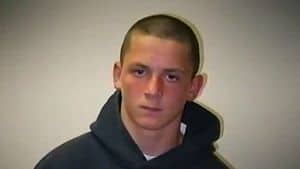 A Southern California teenager faces 21 years in state prison when he's sentenced Monday for killing a gay student during a computer lab class three years ago.

In a deal reached with Ventura County prosecutors last month, 17-year-old Brandon McInerney agreed to avoid a retrial and plead guilty to second-degree murder, as well as one count each of voluntary manslaughter and use of a firearm.

The L.A. Times reports that tensions still simmer at the E.O. Green elementary school where King was killed and some parents still wonder if their children are safe there:

Leaders of the Hueneme Elementary School District, which operates E.O. Green and 10 other schools, say they have no plans to make policy changes as a result of the shooting. Supt. Jerry Dannenberg said there is no need because E.O. Green administrators acted appropriately before and after the shooting on Feb. 12, 2008.

An investigation carried out by the district's insurance carrier determined that no laws were broken nor policies ignored, Dannenberg said. He also defended a memorandum distributed to the school's staff a few weeks before the shooting advising them that King was within his rights. Students "don't have to like it, but they need to give him his space."

Dannenberg said the school board determined that, legally, no changes were necessary. In a lawsuit brought by the Kings, the district admitted no wrongdoing but did settle with the family for more than $250,000.