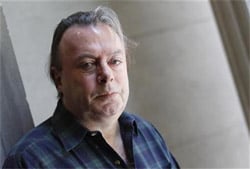 Journalist and outspoken atheist Christopher Hitchens is dead at 62 of pneumonia, a complication of esophageal cancer.

The NYT: "…a slashing polemicist in the tradition of Thomas Paine and George Orwell who trained his sights on targets as various as Henry Kissinger, the British monarchy and Mother Teresa, wrote a best-seller attacking religious belief, and dismayed his former comrades on the left by enthusiastically supporting the American-led war in Iraq…"

Previous Post: « Rick Perry Wants to be ‘The Tim Tebow’ of the Iowa Caucuses: VIDEO
Next Post: Anderson Cooper Talks to Madonna About Releasing Things: VIDEO »