U.S. Senate candidate Elizabeth Warren speaks out for equality in a post at Blue Mass Group: 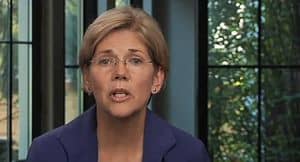 As other states grapple with whether to support marriage equality, I’m ready to move to the next step: End the two-tiered system created by the Defense of Marriage Act. Our federal government should not be in the business of selecting which married couples it supports and which it treats with contempt. States define marriage among couples, and, once married, all those couples and their families should have the same protections, the same benefits, and the same tax treatments. Fairness and equality are foundational values in our country, and nowhere is that more important than in our families.

In the workplace, people should be hired for what they can do and evaluated on their performance – period. I strongly support the fully inclusive Employee Non-Discrimination Act. Particularly in these uncertain times, people must have confidence that they will be judged on the merits. Again, this speaks to the fairness and equality that mark us as a people.

Finally, Massachusetts has been a leader in combating the rise of bullying. After college, I taught elementary school and saw first hand how important it is for kids to learn in a safe and welcoming environment. We need to help teachers and administrators create and foster an environment that welcomes students and their families, whether kids are being raised in a single parent household, by their grandparents, or by their lesbian moms or gay dads.