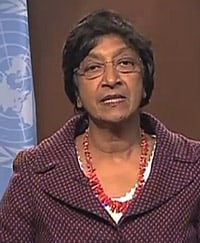 Navi Pillay’s appeal came in a report released Thursday to the 47-nation U.N. Human Rights Council, which in June passed the global body’s first resolution condemning anti-gay discrimination. That vote was hailed as historic by the United States, European countries and others, but decried by some African and Muslim nations…

Said Pillay: “On the basis of the information presented (in this report), a pattern of human rights violations emerges that demands a response…Governments and inter-governmental bodies have often overlooked violence and discrimination based on sexual orientation and gender identity."