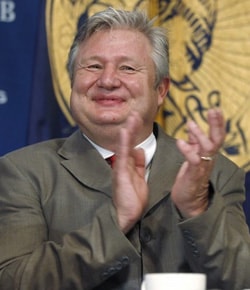 Marcus Bachmann told the NYT what his agenda would be should his wife be elected President:

“I’ve decided my cause is not going to be happy meals,” he said during a stop at the Family Table Restaurant here, apparently a dig at Mrs. Obama.

“We are going to be the message-givers,” said Mr. Bachmann, who runs a Christian counseling service that has been accused of trying to “heal” gays by persuading them to become heterosexual.