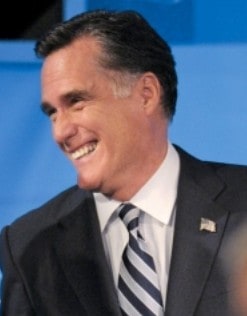 Mitt Romney, the semi-kinda-front-runner in the Republican presidential primary race, on Friday answered an Iowan's question about the fabled War On Christmas. From The Hill:

"I know there are some people who would like to make this nation a secular nation, who want to take God out of everything that exists in this country. They try to say it's unconstitutional,” Romney said. "I trust in God, and I know you do, and I believe it's appropriate for us to recognize in the public square that we do indeed have a creator and that we trust in our creator, particularly at this time of year.”

(Romney didn't explain whether by "this time of year" he referred to "just before Christmas" or "in the weeks immediately preceding the Iowa caucuses.")

Isn't there something inescapably cynical about Romney using this kind of language to inflame the passions of fundies who believe Romney and all his co-Mormons are devil-deluded reprobates doomed to spend eternity in a lake of fire? Romney, perhaps realizing the absurdity of his position, quickly toned down his rhetoric, and proceeded to advocate for a more broad-minded religiosity:

…  “I believe that we should be able to have religious ornamentation and celebration in the public square. Whether that’s a manger or a menorah, or representatives of other faiths, it is important for us as a society to recognize that we look to God for many of our blessings.”

Romney, who has mostly steered clear of religious discussion on the campaign trail, added that he does not “want to impose” religion on those who don’t believe in God.

“But one of the things I love about this country is that whether you are believing or non-believing you typically have something more important to you in your life than just yourself,” he said. “I’m not looking for teachers to have prayer every day in the classroom, but I do think at special ceremonies — graduation, football games and the like — that calling on our creator is a good idea."

Aha. So: We should keep religion out of civic life. Except at pep rallies.