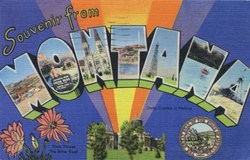 ThinkProgress' Igor Volsky fills us in: "Sixty-two percent of Montana voters 'want same-sex couples to have legal equality, including 84 percent of Democrats, 65 percent of independents, and 39 percent of Republicans,' but 51 percent still oppose marriage equality."

It's incredible to me that people get so hung up on terms — they're willing to give gay people equal rights, but want to call it something else. How about sexual segregation?