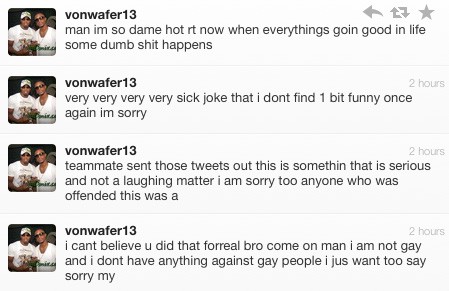 Boston Celtic Von Wafer, who sent out a tweet yesterday that had some people thinking we might just have our first out professional athlete, is not gay, and he claims that a teammate sent out the tweet declaring "I just wanna be gay,I wanna be honest with y'all… I like mens since I was like 15yo , dont be mad ppl on me cuz I still wanna have friends".

Previous Post: « Eight-Year-Old Tells Michele Bachmann: ‘My Mommy’s Gay But She Doesn’t Need Fixing’ – VIDEO
Next Post: MAP: Where are the Hung Men in Europe? »