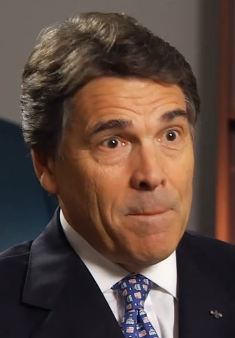 One day in the not-too-distant future, Rick Perry will disappear from the pages of the nation's newspapers forever. Unfortunately for him, that day has yet to arrive, and the Texan governor still has at least a few weeks in which to embarass himself on the record.

At a meet and greet today in Cedar Falls, IA, Gov. Perry was asked by a voter to "defend his criticism of limited government" in the Supreme Court case of Lawrence v. Texas — the case which, in 2003, resulted in Texas's anti-sodomy law being struck down as unconstitutional. Perry was Texas's governor at the time. According to ABC News:

Maybe so. But seeing as Perry referenced the case in his most recent book, and seeing how Perry is trying to portray himself as the most stridently "pro-family," anti-gay candidate in the Republican field, he ought at least to behave as though he's been paying attention to the culture wars. You can bet Rick Santorum knows about Lawrence v. Texas.

Asked by Ken Herman, a columnist with the Austin American Statesman, for clarification on whether he knew what the case concerned, Perry responded, “I’m not taking the bar exam…I don’t know what a lot of legal cases involve.”

When told that the Supreme Court case struck down the Texas sodomy law, Perry said, “My position on traditional marriage is clear and I don’t know need a law. I don’t need a federal law case to explain it to me.”

Previous Post: « Priests Do Battle At Site Of Jesus’s Birth
Next Post: NEWS: Santorum Surges, Kids Come Out, And Aliens Get Jiggy In Nevada »