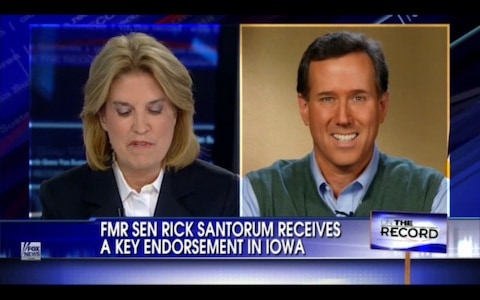 Rick Santorum is basking in a post-coital glow over having sweet endorsement love be made to him by Bob Vander Plaats yesterday. Greta Van Susteren last night asked Santorum if there's any possible way for him to get the gay vote?

I have nothing against gay people. They have rights of every other citizen. But what they did in Iowa and what some are trying to do, not all gays, but some are trying to do is change the laws of this country with respect to what the definition of marriage is….. But if there are differences, I’m certainly going to speak out on those differences when I think it’s in the best interests of our country to have laws that reflect having men and women raise children and form solid marriage bonds.

Santorum was then asked if he could understand the "heartache" that his views bring to gay people.