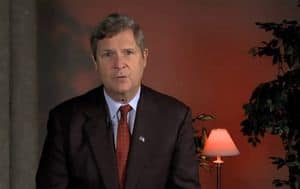 "I don't know what that's got to do with the Secretary of Agriculture," Vilsack told POLITICO. The USDA chief said the question of gay marriage was a distraction to the issues that farmers, ranchers and rural Americans faced.

"I will be happy to answer that question someday," he said. "That day is not today."

Vilsack does think that it was right for the judges he appointed to approve it in Iowa:

But perhaps Vilsack just doesn't want to get a step ahead of his boss.

Previous Post: « GOP ‘Family Values’ Mayor Greg Davis of Southaven, MS Forced Out of Closet by Receipts from Gay Sex Shop
Next Post: ‘Jack and the Beanstalk’ Gets a Bryan Singer Facelift: TRAILER »