Greg Davis, the mayor of Southaven, Mississippi, "who ran unsuccessfully for Congress in 2008 on a conservative, family-values platform" according to the Commercial Appeal, has been forced out of the closet over receipts uncovered in a criminal investigation over misused expenses. The receipts included "thousands of dollars worth of liquor, expensive dinners at a local restaurant and a visit to an adult store catering to gay men": 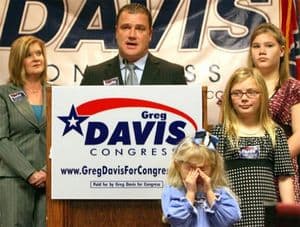 As details emerged Thursday from the receipts, provided by state auditors to Southaven aldermen and subsequently obtained by The Commercial Appeal, Davis conceded publicly for the first time in an interview with The CA that he is gay and has struggled to keep the issue from affecting his public life as mayor of Mississippi's third-largest city.

"At this point in my life and in my career, while I have tried to maintain separation between my personal and public life, it is obvious that this can no longer remain the case," Davis said Thursday afternoon at his Southaven home. "While I have performed my job as mayor, in my opinion, as a very conservative, progressive individual — and still continue to be a very conservative individual — I think that it is important that I discuss the struggles I have had over the last few years when I came to the realization that I am gay."

Davis doesn't recall what he bought at the Priape sex shop:

The receipts were provided to state auditors in hopes of decreasing the approximately $170,000 they have demanded Davis repay the city for improper charges to both his city-issued and personal credit cards. Auditors asked city aldermen, who approved the expenses, to review the receipts before making a decision on accepting them to reduce Davis' payments…

…a review by The CA shows that Davis spent thousands of dollars at the Mesquite Chop House in Southaven and thousands more at local liquor stores. Also included in the receipts is a charge for $67 at Priape, a store in Toronto that is described by its website as "Canada's premiere gay lifestyle store and sex shop."

Davis said he didn't remember what he bought at the store, which he visited on a recruitment trip with Mid-South warehouse developers.

Photo: Davis running for Congress in 2008.