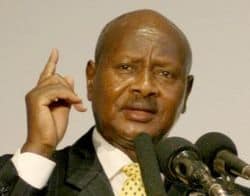 In Uganda, where legislators have spent much of the last two years wondering whether to execute gay people, President Yoweri Museveni is worried about money.

At a speech on Friday, President Museveni sent a message to the Western, pro-gay nations who've historically given Uganda monetary aid, warning them that any economic sanctions against Uganda would backfire on their beloved LGBTs. "Before anyone gives me a lecture on homosexual rights," he said, according to News24, "first talk about railways … Homosexuals also need electricity. Homosexuals also need roads. Homosexuals also need railways." These remarks were greeted with applause.

It appears Museveni is speaking out in response to recent high profile utterances from Hillary Clinton and British PM David Cameron both of whom asserted that "LGBT rights are human rights," and pledged to work to ensure the legal protection of LGBTs around the world. It's worth noting that Museveni quietly supported proposed legislation in 2009 that would guarantee the death penalty for "serial" sodomites, and has deep ties to The Fellowship — the United States organization of Protestant fundamentalists who attempt to export Christian morality to developing nations.

Previous Post: « There Ought To Be A Law Against Fornication, Infidelity
Next Post: Pope ‘Tired’ And ‘Weak’ As He Preps For Christmas Celebrations »