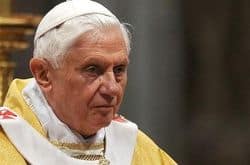 Pope Benedict XVI, the world's most powerful opponent of LGBT rights, entered the Christmas season noticeably fatigued. According to the AP:

Benedict turns 85 in the new year, so a slowdown is only natural. Expected. And given his age and continued rigorous work schedule, it's remarkable he does as much as he does and is in such good health overall: Just this past week he confirmed he would travel to Mexico and Cuba next spring.

But a decline has been noted as Benedict prepares for next weekend's grueling Christmas celebrations, which kick off two weeks of intense public appearances. And that raises questions about the future of the papacy given that Benedict himself has said popes should resign if they can't do the job.

In recent weeks, Pope Benedict has begun using a moving platform to carry him to mass from the sacristy at St. Peter's, and has ceased meeting privately with visitng bishops. During a recent trip to Benin, he trimmed back his customary number public speeches. And during a recent "peace pilgrimage" to Assisi with other religious leaders, the pontiff seemed especially weary:

"Indeed I was struck by what appeared to me as the decline in Benedict's strength and health over the last half year," said Rabbi David Rosen, who had a place of honor next to the pope at the Assisi event as head of interfaith relations at the American Jewish Committee.

"He looks thinner and weaker … which made the effort he put into the Assisi shindig with the extraordinary degree of personal attention to the attendees (especially the next day in Rome) all the more remarkable," Rosen said in an email.

Pope Benedict is still trying to execute his duties, and he's got ambitions. The pontiff still wishes to welcome back into the fold those breakaway sects of traditionalist Catholics who've felt jilted by the mother church's long, slow slide into liberalism under his predecessors. He wants to visit Mexico and Cuba in the spring, and he still hopes to be present at the next World Youth Day in Rio, in July, 2013 — 20 long months from now.