Today, I'd like to talk about a man known for the sharpest of legal minds. A man who some think is becoming an ally in our search for equality. 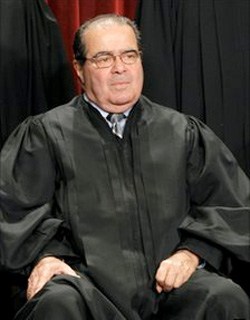 He is a brilliant lawyer, a former editor of his top-10 law school's law review, and an incomparable advocate for his interpretation of the Constitution. His acerbic wit is ready to be levied against the left and the right when they get things wrong. He has been involved in some of the most important civil rights cases in the last thirty years, has represented conservative and progressive causes in his career, and has been a friend to law students wading through the muck to reach the promised land of thinking like a lawyer. He is a great friend of the scion of the women's rights movement, Justice Ruth Bader Ginsburg, and is a lover of opera and baseball.

I am, of course, talking about Justice Antonin Scalia of Queens (by way of Trenton). And, he may be a great friend when Perry v. Brown reaches the Supreme Court. This is one of the implications of a recent Slate article by David Gans and Doug Kendall, available here.

Take a moment to read their thoughts and then, let's discuss how they are right… to a point.

To see how, continue reading AFTER THE JUMP.

Mssrs. Gans and Kendall discuss conservative jurists' and lawyers' embrace of a wider conception of the Fourteenth Amendment than many of us had feared. This is important, not only for what a narrow interpretation of, say, the Equal Protection Clause, might mean for the future of justice in this country, but what it may mean for specific cases involving women, gays, and other historically disadvantaged minorities. 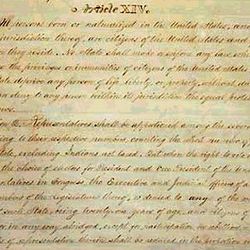 Here is their argument in brief: Conservative legal luminaries have for some time argued that the Fourteenth Amendment, which provides, in relevant part, that "no state shall … deny to any person within its jurisdiction the equal protection of the laws," does not protect women from sex discrimination. Their rationale is that women were not on the minds of the drafters of the Amendment, African-Americans were.

With that, Professor Calabresi, the founder of the conservative legal organization, The Federalist Society, sounds more like Larry Tribe, the famous liberal lion of constitutional law. Mssrs. Gans and Kendall suggest that we are coalescing around a broad view of the Fourteenth Amendment as the provision that "redeemed the Constitution from the sin of slavery" by making all forms of second-class citizenry unconstitutional, not just a particular racist attitude toward blacks. Equality, the authors write, "is neither a progressive nor a conservative idea: It is an American idea." Heart-warming words, indeed, and ones that are at the core of our community's bi-partisan push toward recognition as  members of society just like everyone else.

But, while Professor Calabresi's argument is historically accurate and persuasive (you can read his law review article here, if you have a long plane ride ahead of you), Mssrs. Gans and Kendall should take a step back before coming to such grand conclusions for at least two reasons.

First, coalescing around a broad reading of the Equal Protection Clause is great, but if we must do so on the back of a textualist or originalist interpretation of the Constitution, I am afraid we miss the forest for the trees. Textualism and originalism, simplified as the interpretive theories that argue that the Constitution means whatever the words meant when they were written, has long been a tool of the legal right wing to turn back the clock to a minimalist federal government — before Roe v. Wade, before the Warren Court, before the New Deal and Progressive Era.

For example, the Commerce Clause never imagined federal interference in telling farmers what they can and cannot grow (Wickard v. Filburn), nor did any part of the Constitution imagine Miranda warnings, the exclusionary rule, or the illegality of the death penalty. Admittedly, accepting a textualist interpretation of one clause does not necessarily require us to be textualists in all cases, but it does assume the validity of the interpretive method. I am not sure we want that.

Keep in mind that this interpretive regime and the relevance of the Nineteenth Amendment for a broad reading of the Fourteenth Amendment is salient for textualists and originalists. I am under no such burden. I have no problem accepting the applicability of the Equal Protection Clause to sexual orientation discrimination, and just because Justice Scalia believes that the clause bans sex discrimination does not mean he is on board with the view that the clause also bans sexual orientation discrimination. For a textualist, the journey is much harder.

That suggests that the textualist interpretation is wrong and, at a minimum, not our ally when it comes to cases like Perry. Mssrs. Gans and Kendall are right to point out that textualists are making progress; but they are wrong to see that progress as even remotely sufficient.