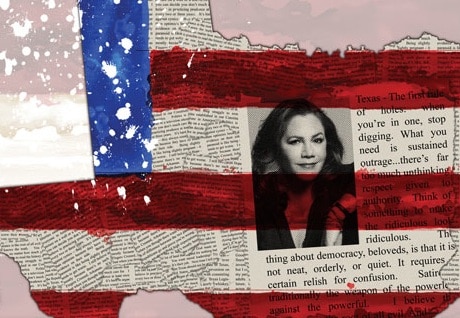 We have a great theatre opportunity for those of you who are in L.A. or planning to be there at the beginning of January.

Enter to win one of 3 sets of 2 FREE tickets for Friday, January 6, 2012 at 8:00 pm to see two-time Tony and Oscar nominee Kathleen Turner as Molly Ivins, the brassy Texan reporter whose liberal journalism skyrocketed her to the national stage, in Red Hot Patriot at the Geffen Playhouse:

From writing Elvis Presley’s New York Times obituary to becoming the most widely-read self-proclaimed “pain in the ass to whatever powers come to be,” Ivins, often described as a modern-day Mark Twain, made rabid fans and enemies alike with her sharp-tongued humor and unabashed political criticism. This acclaimed show captures the redheaded reporter’s indomitable character by weaving personal anecdotes with her colorful take on national politics.

ALSO, Order tickets for any show Jan 3-22 with the Towleroad discount (CODE RED40) for up to 52% off (including fees). Just go here.

Winners will be selected and notified either by email on or before December 28, 2011 and will have 24 hours in which to reply and claim their prize before a new winner is drawn at random