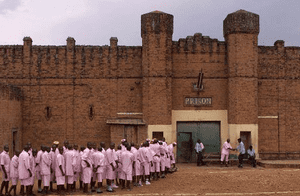 Senegal, with its Sufi Muslim majority, has one of the lowest incidences of AIDS in Africa, largely due to successful condom and needle distribution progrms. But the disease is rampant among gay men, with infection rates as high as 22%, according to AIDSAlliance — and according to Catholic Online, the disease is spreading unchecked in the nation's prisons.

The reasons are religious, naturally. A Catholic Online reporter asked Assane Balde, the chief medical officer at Camp Penal, one of Sengal's largest prisons, whether free needles and condoms might be made available to inmates. (Yes, it's a weird question for a Catholic reporter to ask, but never mind.) From Catholic Online:

… Balde is steadfastly opposed. He says they do not have problems with hard drugs and a condom distribution program would simply not be tolerated.

"Our religion doesn't permit this," Balde says. "We are Muslims, and as Muslims we don't like seeing that. There is no tolerance for this type of behavior. It's a taboo subject, and we don't even talk about it."

In nearby Ivory Coast, a recent study of a prison found that 28% of inmates are HIV positive, while the infection rate in the general population is just 7%. In South Africa, where the general infection rate is 12%, rates of infection in prisons are 40 – 45%. There is no mandatory testing in Senegalese prisons, so although it's known that prisoners are becoming ill in increasing numbers, no statistics are available. But if even Senegalese medical officers refuse to discuss the issue, the numbers, whatever they are, can only get worse.