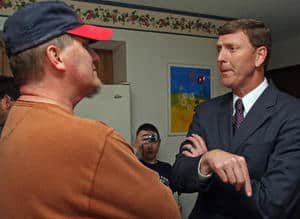 Hideous homophobe Bob Vander Plaats, head of the Family Leader, appeared on Fox News this morning and predicted that his preferred candidate, Rick Santorum, will clean up during today’s Iowa caucuses. Why?

According to Vander Plaats, because Mitt Romney “has pretty much dissed” Evangelical voters. But could there be another reason for Vander Plaats’ on-camera prophecy?

ThinkProgress reminds us that the social conservative leader has been accused of “pay for play” schemes involving his endorsement:

[He] has sparked criticism in recent days for engaging in “pay for play” schemes and selling his coveted support among Evangelical Christian voters to the highest bidder. ABC News reported lat week that the Vander Plaats approached Romney in 2008 “seeking money for his backing if he supported the former Massachusetts governor.”

“He wanted to be paid,” a former staffer said. “He was clearly looking for a paycheck. There was a conversation about him getting a title, but being a paid consultant was much more important.”

A conservative activist using his surprising power — Vander Plaats is a perennial “also-ran” in Iowa — to make a buck? If that’s the case, he could just become a regular on Fox News. Cut out the middle man and all that.

Watch video of Vander Plaats’ remarks, AFTER THE JUMP…