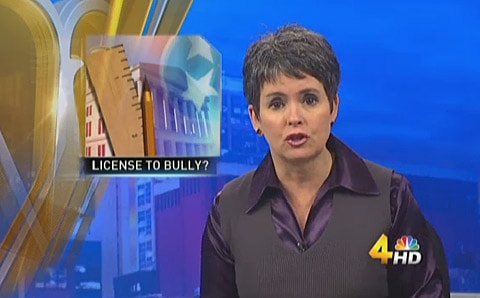 A proposed change in Tennessee law would protect students who bully gay students if they do it for religious reasons, WSMV reports:

They're considering making a change in the law to allow students to speak out against homosexuality, if that's what their religious beliefs call for. Supporters have said this is about protecting the free-speech rights of students who want to express their views on homosexuality. But gay rights groups are calling the idea a "license to bully."…

The bill is a top priority for the conservative Family Action Council, which on its website says its intent is to clarify that unpopular beliefs don't constitute bullying. Gay rights groups say it's a fine line between protecting academic discourse and protective hate.

"What if one student calls another one a sinner, or a sodomite or says you're perverted or you're unnatural or you are going to hell. That's where it gets really dicey," Sanders said.

Students like Fussman say Middle Tennessee has already seen one gay teen commit suicide after he was reportedly bullied at school, and she worries that number could grow if this bill passes.

Watch WSMV's report, AFTER THE JUMP…

Here's more on the so-called "License to Bully" bill at Nashville Scene.