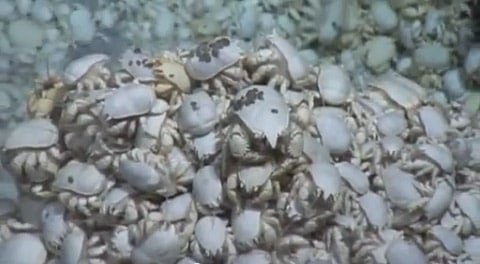 A Yeti crab nicknamed "The Hoff" for its hairy chest is one of many new species identified in a "lost world" several miles under the surface of the Southern Ocean near Antarctica, the Guardian reports:

One of the nicknames of the crabs which developed during the cruise was the Hasselhoff crabs because they had these dense mats of [hair] on their undersides, the equivalents of their chests."

Another striking creature spotted by the scientists was a pale octopus, which was photographed by the team. Rogers suspected it might be a new species related to the Vulcanoctopus hydrothermalis seen at other underwater vents around the world.

In total, the expedition brought back more than 12,000 samples of rocks, bacteria and animals. Rogers said: "One of the staggering things we did find is that these vents are completely different to those seen anywhere else – the animals existing at these vents are almost all new to science," he said.

Watch a Reuters report on the find, AFTER THE JUMP…