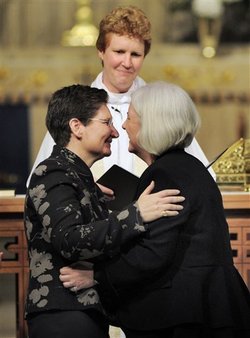 The New Year brought new opportunities for same-sex couples living in Delaware and Hawaii, where civil union laws went into effect after midnight. This brings the total number of states that allow such unions to five.

Four couples were quick to take advantage in Honolulu and registered their relationships soon after the ball dropped.

"We really don't want to wait any longer because we have been together for 33 years waiting for the opportunity and our rights and everything that goes with it," said one woman, Donna Gedge, as she and partner Monica Montgomery, entered their union. "So why wait?"

Montgomery, meanwhile, remarked, "[This] means that our state supports us, and that's a really good feeling after all this time."

Delaware's law went into effect yesterday at 10am, and lawyers Lisa Goodman and Drewry Fennell (pictured) were the first couple to take advantage during a ceremony at Wilmington's Trinity Episcopal Church. The couple, who have been together for 14 years, were joined by 400 family and friends, including Senator Chris Coons, who delivered the accompanying sermon. Lieutenant Gov. Matt Denns read some scripture.

"We felt so lifted up by everyone who was there," Goodman told CBS News.

It is worth mentioning that both the Hawaii and the Delaware laws are explicit in noting that unions are not the same as marriage. "It is not the legislature's intent to revise the definition or eligibility requirements of marriage," read the laws.

While this is a notable win for equality, it's only the first step toward true nuptial inclusion.