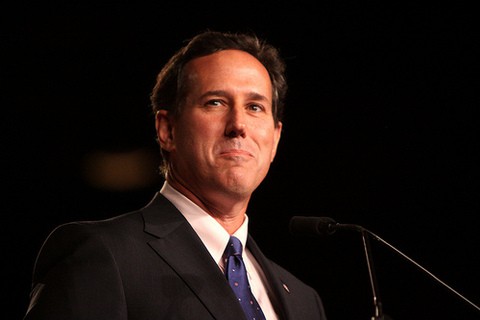 The Iowa caucuses are tomorrow, which means presidential candidates like Rick Santorum are pulling out all the stops to woo social conservatives who can make or break campaigns in the Hawkeye State.

Determined to prove himself the most conservative White House hopeful, the former Pennsylvania senator last Friday told MSNBC’s Chuck Todd that in addition to banning marriage equality from coast-to-coast with a federal amendment, he also hopes to nullify all existing same-sex nuptials.

Here’s the transcript, via ThinkProgress:

SANTORUM: I think marriage has to be one thing for everybody. We can’t have 50 different marriage laws in this country, you have to have one marriage law…

TODD: What would you do with same-sex couples who got married? Would you make them get divorced?

Santorum goes on to say that he wants to take matters into his own hands lest the Supreme Court decide the matter once and for all in a move he likens to ‘Roe v. Wade,’ which lifted bans on abortion.

His argument, not surprisingly, amounts to more contradictory messages from a conservative. They believe in love and family, yet only if it fits into their tidy, archaic little box. The rest of us deserve to languish — alone and pitiful and oppressed. That’s some grand old politicking, right there!

In related news, Santorum was glitterbombed Friday evening. It wasn’t as large or impressive of a display as some of the other rainbow-flavored actions against GOP candidates, but it’s better than nothing.

I’ve included video of the incident, as well as Santorum’s exchange with Todd, AFTER THE JUMP…